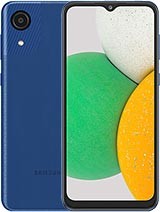 Expected Price of Samsung in USD is $127.

Samsung today, without any prior announcement, unveiled a new smartphone from its offering. It is a phone that belongs to the category of cheap or so-called. budget smartphones, and it is called the Samsung Galaxy A03 Core. Samsung has not announced exactly which chipset runs this phone, but they stated that it is an octa-core processor, whose four cores run at 1.6 GHz and four at 1.2 GHz. These are the clock speeds that match the Unisoc SC9863A chipset. Samsung Galaxy A03 Core comes paired with 2GB of RAM and 32GB of internal storage (ROM). It can also be expanded because the phone has a slot for microSD cards, and there are two more places for two nano-SIM cards. The front of the phone is covered by a 6.5 "HD + IPS LCD screen. At the top of the screen is a drop-shaped cutout, which hides the front sensor of the 5 MP camera. The power key is on the right side of the phone, and above it is the volume key. There are fairly thick frames around the screen, especially below the screen. Turning the Samsung Galaxy A03 Core, we notice the camera module and LED flash on the back. In the upper left corner of the back cover is the main camera sensor of 8 MP, and below it is the LED flash. Under the phone cover is a 5000 mAh battery, which comes with support for 10W charging. Unfortunately, the prices and availability of the phone have not been announced, but it is expected that Samsung will announce it soon.