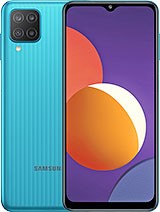 Expected Price of Samsung in USD is $224.

Samsung has introduced its new Galaxy M12 smartphone to the market. The company is working on another member of the Galaxy M series and everything indicates that the phone is a budget smartphone. And it is packed with a high amount of battery. In other words, this battery is bigger than some of the companyâ€™s tablets. The upcoming Samsung Galaxy M12 will be powered by Exynos 850 (8nm) the entry-level chipset of the company that is used in smartphones that are available at a reasonable price. This Samsung's Galaxy M12 has a 2.0 GHz Octa-Core Cortex-A53 processor installed under the hood of this device, and there is a GPU of Mali-G52 in this smartphone. The upcoming new Samsung Galaxy M12's having Full Vision display characteristics where its resolution is also changed and now you will get the Full HD Plus resolution. 720 x 1600 Pixels will keep the Galaxy M12 by Samsung bright and colorful while PLS IPS Capacitive touchscreen panels are going to enrich the quality of the pixels with bright colors. The display size of the screen will be 6.5 inches, which is big screen size. There is a two variant in RAM used in this Samsung M12 is 4 gigabytes capable to run this smartphone smoothly without hurdle or hanging. The internal storage of the coming up new Samsung Galaxy's M12 is 32/64/128 gigabytes. This is a huge amount of storage to hold a lot of data. But if you want to enhance the storage capacity of the phone you can use the dedicated slot to add more storage. In the back of the Samsung Galaxy M12, there is a Quad Camera setup but it is not announced yet, only the main camera of this smartphone is 48 megapixels and the front-facing camera on the phone is 8 megapixels. In order to protect your data, the new Samsung Galaxy M12 has a fingerprint scanner. The company has revealed several budget phones with huge batteries in the past year, offering capacities of 5,000 mAh and 6,000 mAh. But now they have introduced a 5000 mAh big battery in Galaxy M12's. With a Fast battery charging of 15W.